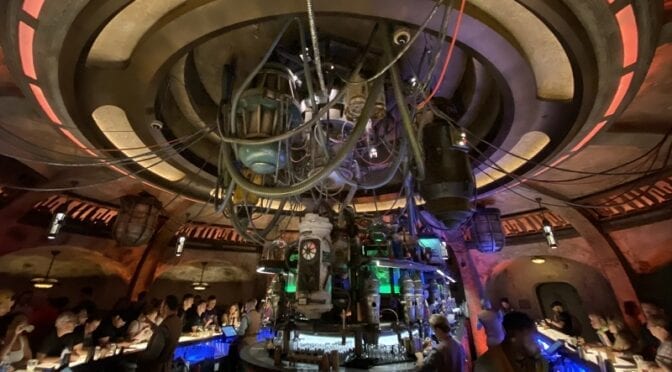 Whether you’re a massive Star Wars fan or even moderately interested in the franchise, I can’t help but recommend a visit to Galaxy’s Edge at Walt Disney World. Having seen it for the first time this fall, any member of your family will definitely have an appreciation for the care and detail put into creating this “galaxy far, far away”. But this busy Boca mom doesn’t have much time…or a huge budget these days for family vacations. So, I’ve gathered some tips on how you can make the most of your journey to Batuu and do it affordably.

Let’s be honest, until Brightline/Virgin Trains USA finishes up their train route to Orlando, us Boca residents are going to be driving the family up. It’s the most cost-effective way to go to Central Florida by far, especially if your hotel has complimentary parking.

For my Walt Disney World Star Wars Galaxy’s Edge trip, I was loaned a 2019 Mazda CX-5 Signature AWD (starting MSRP $36,890. Base models start at $24,350–pretty affordable!). Beyond being an ideal size for a family, the CX-5’s capable performance, efficiency and boldness have made it a favorite in its class.

We felt extremely safe on Florida’s Turnpike due to several of the 2019 Mazda CX-5 features:

I am pretty anti-minivan, so this sporty SUV is a great compromise for us, with lots of space, safety and entertainment features for our family (oh yes- did I mention it has Apple CarPlay integration with Sirius/XM, navigation and Bluetooth?).

Have you heard about Undercover Tourist? Undercover Tourist provides authentic attraction tickets at discounted prices, as well as insider planning tips and excellent customer service. These include cheaper tickets to Walt Disney World! Simply look for admission that you’re interested in on their site and purchase at a significant discount.

Save those extra dollars for the blue milk (details ahead)! Trust me. 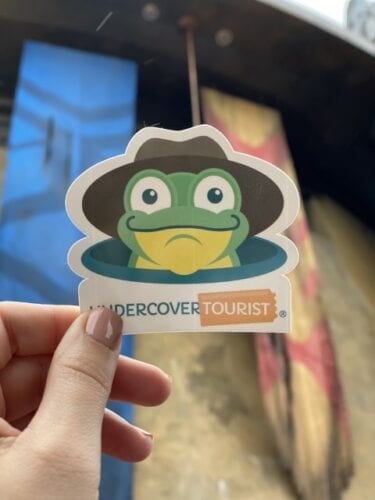 Disclosure: We are an Undercover Tourist Affiliate, which means we will make a small commission if you purchase. Thank you for supporting our website!

Located at Walt Disney World’s Hollywood Studios (just beyond Toy Story Land), Star Wars Galaxy’s Edge is home to Black Spire Outpost on the planet Batuu. The craziest thing about the land (to me) though is that it has ZERO Star Wars or Disney branding in it. You literally feel like you’ve traveled somewhere in the galaxy beyond. 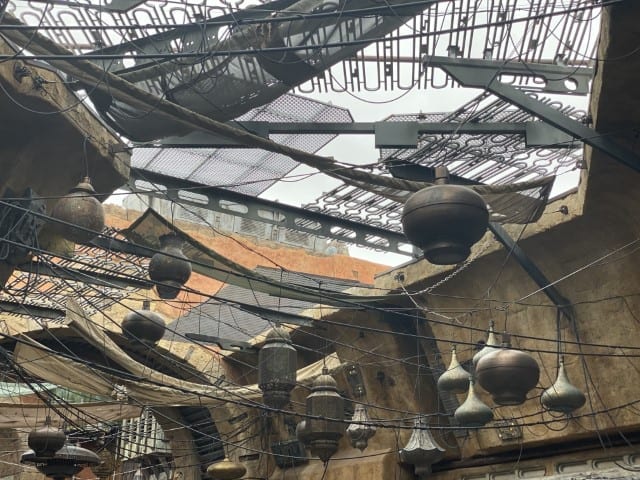 If you only have a few hours, don’t miss…

Oga’s Cantina | Forget the rides. This was my favorite part of Galaxy’s Edge! Having a local (adult or virgin) beverage and tasty snack as you listen to a robot-DJ spin Star Wars classics is not something you can experience just anywhere! But you MUST HAVE A RESERVATION. Going to the park mid-week was a good move. I was able to book two reservations on the day-of. But, don’t get discouraged if you can’t get one. Try (and keep trying) on the My Disney Experience app once you arrive at the park because there are always cancellations. And don’t forget to tip the amazing (always in-character) staff!

MBMom Tip: If you book a reservation for a large party (4+), be sure to request to sit at one of the booths when you arrive at the check-in line. It might take some extra time, but otherwise Oga’s Cantina is standing room only.

Millennium Falcon: Smugglers Run | It is an adventure and a half!!! This ride is a motion simulator, however, so if you experience motion sickness, you’ll have to skip it. 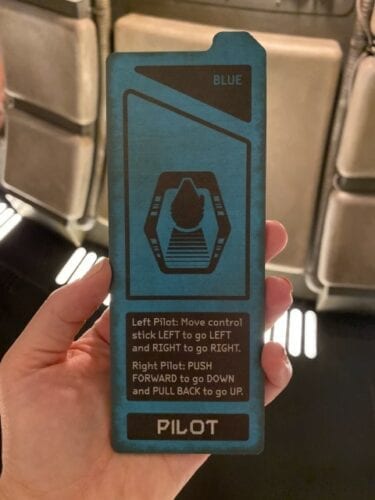 Again, going mid-week, I was able to ride Smugglers Run twice. And the queue has a ton of interesting things to look at. Most notably: THE ACTUAL MILLENNIUM FALCON. 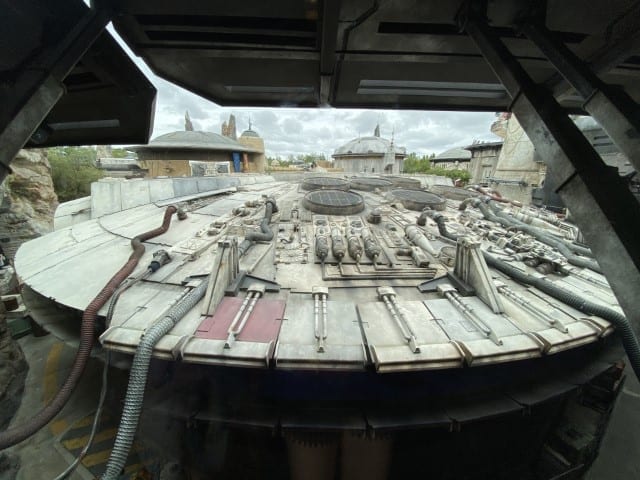 The first run, I was a Pilot which was so much fun (you’re in the front row). But it was also a lot of pressure. I really didn’t want to crash our ship! So the second time, I opted to be a Gunner, so I could simply hit a button (pew pew pew!!!) shooting at First Order spacecraft throughout the flight. Take note–each ship only seats 6, so you’ll have to split up your party if you have more people than that.

READ  What to Pack & Expect on an Impact Travel Cruise

MBMom Tip: Try to let your kids be the pilot at least once. They’ll never forget it! 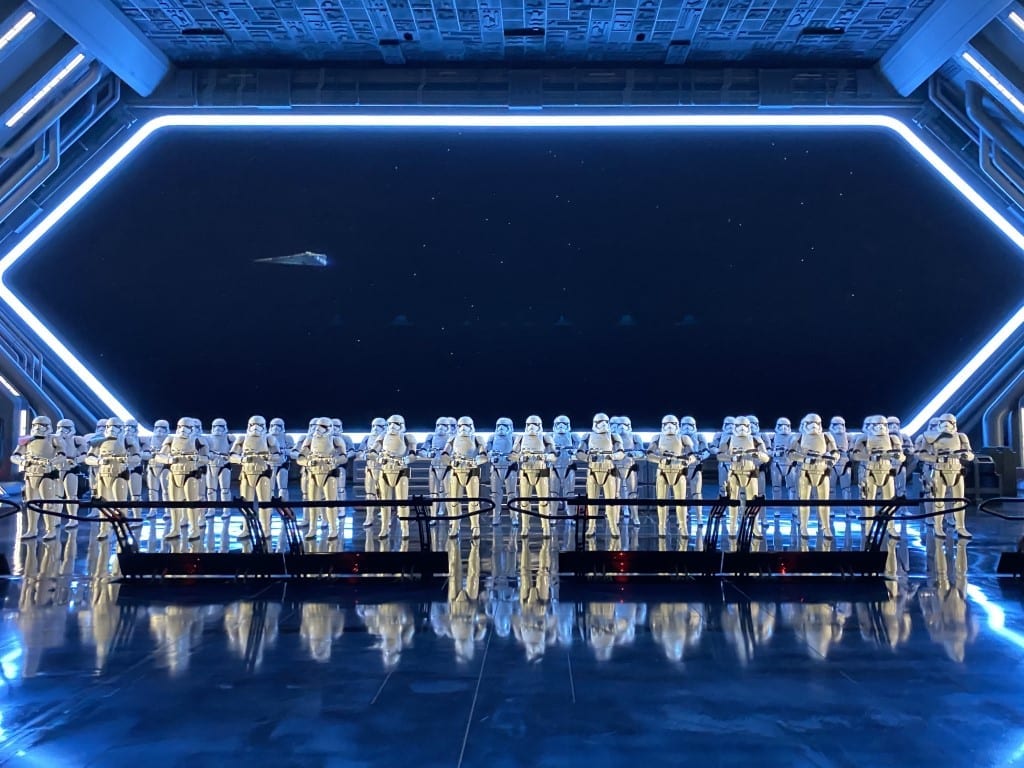 Star Wars: Rise of the Resistance| As of this publishing update (1/27/20), those who are eager to experience this one-of-a-kind Walt Disney World attraction must obtain a Boarding Pass! There is no queue for this experience at this time. 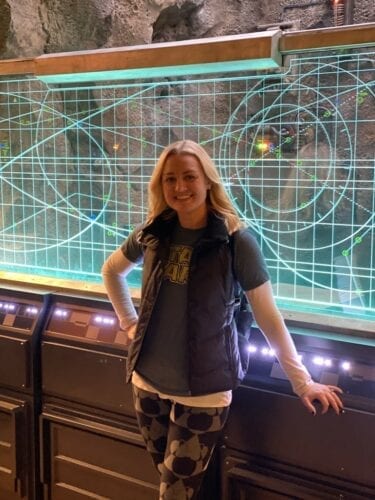 Here’s how to get a Boarding Pass to Star Wars: Rise of the Resistance successfully:

READ  How to Survive Your First Orlando Trip as New Parents 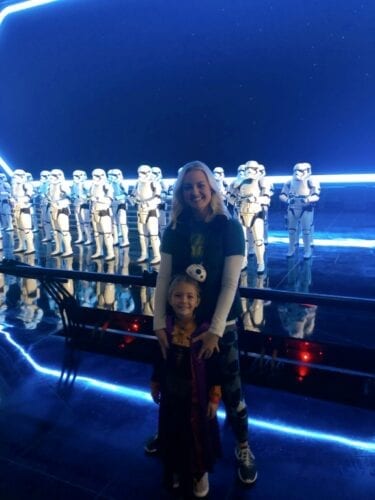 MBMom Tip: This attraction is VERY realistic. Some young children might think it’s a little too real (so prep them accordingly- you must be 40″ tall to ride). But for a true fan, Star Wars: Rise of the Resistance is an actual dream come true. Enjoy! 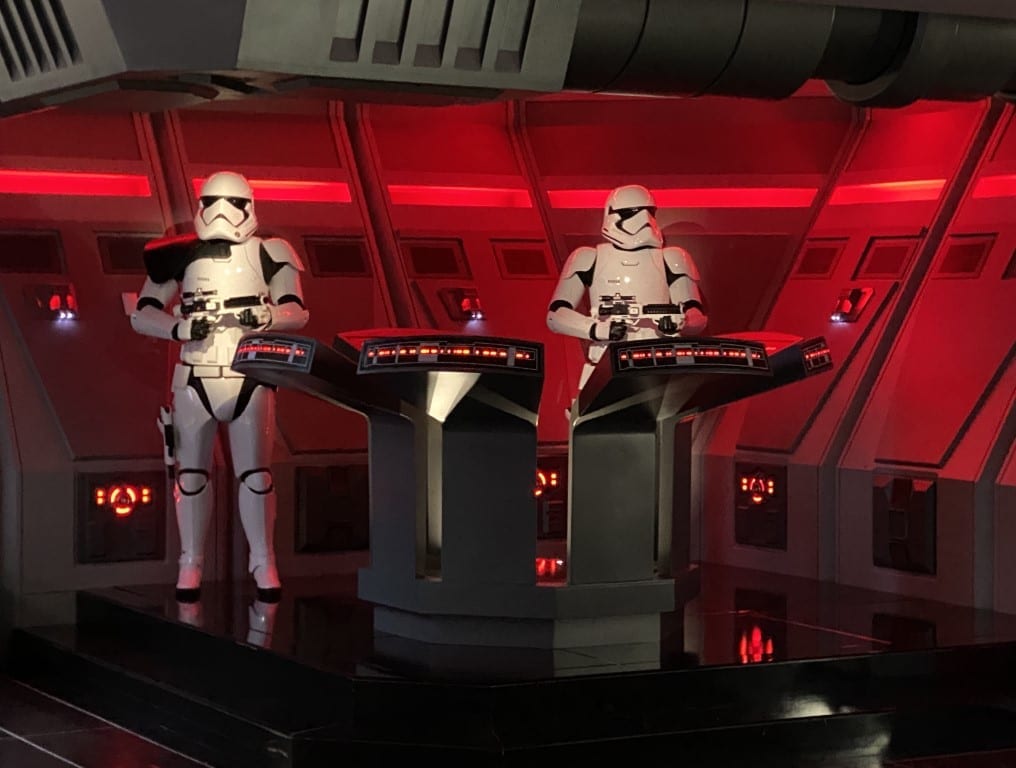 Disclaimer: I was provided with two complimentary Disney Park tickets in order to review Star Wars: Rise of the Resistance for Modern Boca Mom readers. 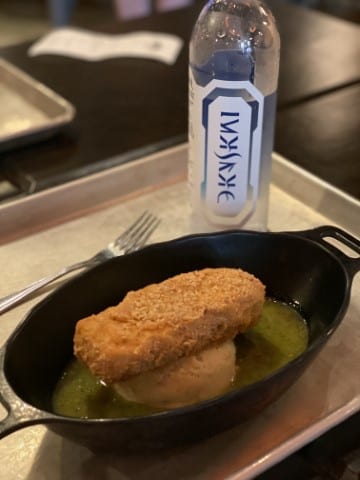 Docking Bay 7 Food and Cargo | Hungry travelers can fuel up on galactic grub at this local Black Spire eatery. Eating something called a “Tip Yip” is worth a stop, trust me. Housed in a working hangar bay (which is pretty cool in and of itself), guests can choose from a variety of dishes prepared with ingredients from across the galaxy. 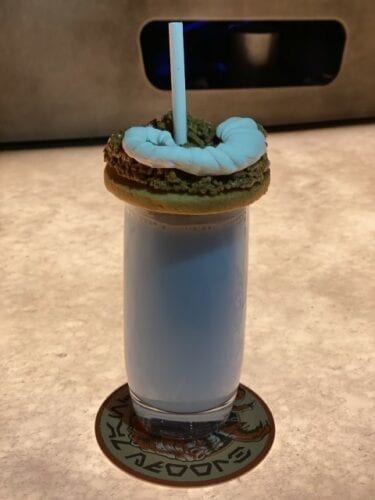 If you only have a few hours, skip… 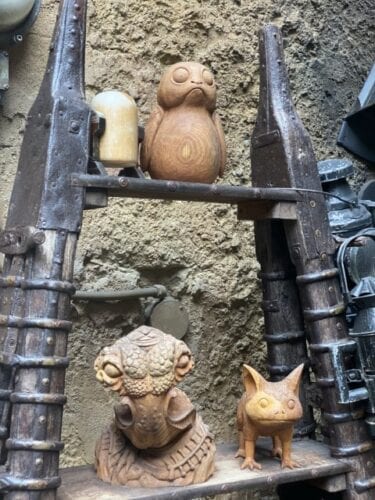 A Shopping Spree | Simply walking through Batuu and seeing all the treasures for sale is satisfying enough. Browse quickly, but save the major shopping for another visit when you have time and money to kill. 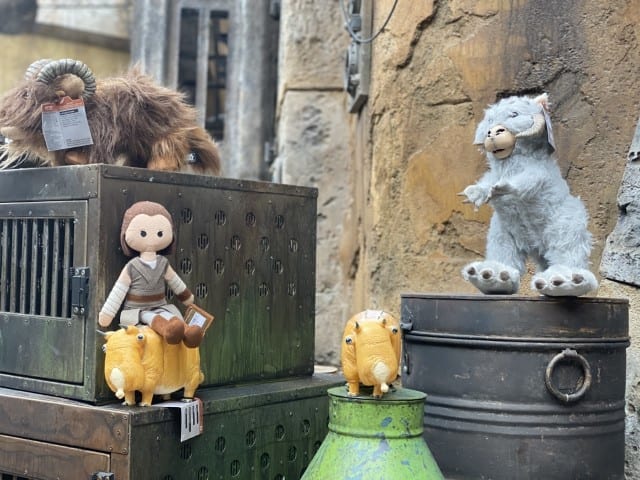 Savi’s Workshop and Droid Depot | Albeit cool to see, these light saber and droid-building activities are pricey and should be saved for only the most devoted of Star Wars fans. Like my husband… 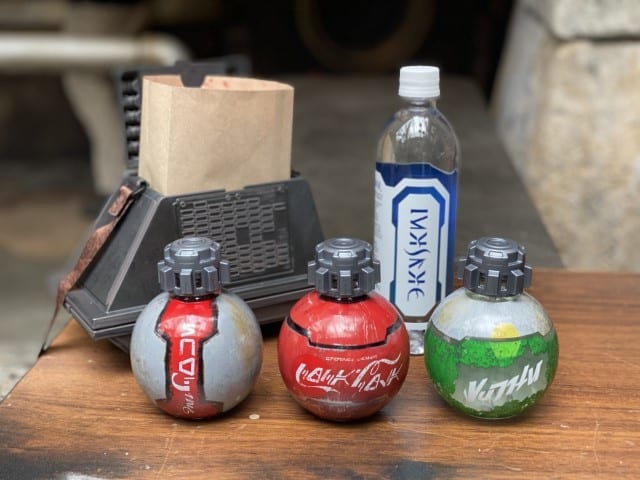 Food Stalls | Sure, intergalactic Coca-Cola is cool to look at, but the $$ price tag isn’t. Grab your photo for Instagram and move on.

I think that’s it for now! Hopefully these tips help you plan your first or next visit to Star Wars Galaxy’s Edge at Walt Disney World.  And you happen to save some time and money along the way! May the force be with you, Boca parents! 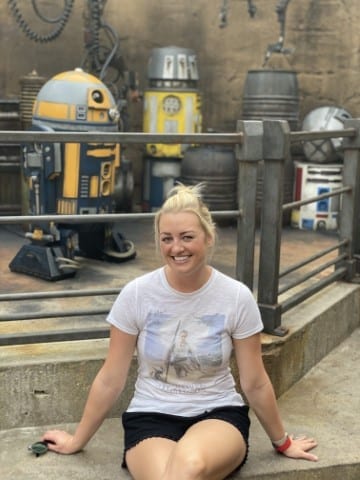 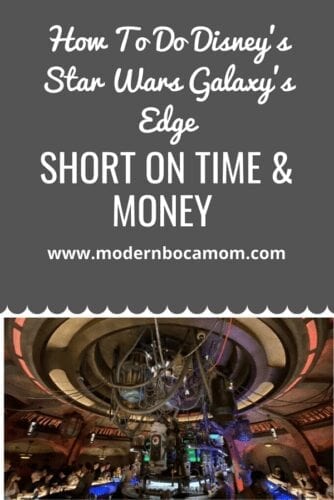 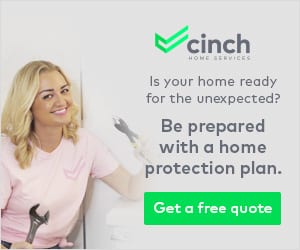